Itria Valley and Murgia of the Trulli

Home Tours Itria Valley and Murgia of the Trulli

Countryside populated throughout the whole year, characterized by “trulli” and dry stonewalls that surround vineyards and olive groves as far as the eye can see. This is what the Valle d’Itria looks like.

The scenery is magic and to enjoy it all you have to cross towns like Alberobello, a UNESCO world heritage site with its 1400 trulli or Locorotondo, which takes its name from the circular plan of the town, dominated by cummerse, the ancient buildings with slanted roofs. The medieval centre of Cisternino, also known as the Island, evokes the image of an oriental village with its houses painted lime and oil burners attached to slaughterhouses where you can taste “bombette” and “gnumaridde”. Between July and August, take a trip to the beautiful baroque town of Martina Franca and attend the Festival della Valle d’Itria, which offers many unpublished opera. The charming plain of Fasano, full of olive groves and close to the sea, is full of beautiful farmhouses and is only a few steps from Egnazia, one of the most important archaeological sites in Italy. Among Torre San Leonardo and Torre Canne meet the Parco Regionale delle dune costiere, a surprising landscape that stretches for 1100 hectares with a variety of habitats: from the beautiful beach to the expansive farms with centuries-old olive trees. Ostuni, the white city, is a succession of arches, towers, palaces, courtyards, terraces, alleys, noble mansions and shops. Ceglie Messapica together with Carovigno are important stops for food lovers with restaurants of international fame and award-winning chefs. On the coast, an old coastal tower surrounded by ancient olive trees, Mediterranean vegetation, wetlands and tall sand dunes became a Marine Protected Area and Nature Reserve: discover Torre Guaceto doing ciclotrekking or seawatching.

At the foot of the Itria Valley there is a magical place, a labyrinth of caves and chasms 3 km long 70 meters under the ground, it’s the most beautiful speleological complex in Italy and you can visit it in two hours (www.grottedicastellana.it). Go down a stairway until the Grave with the giant Cyclops stalagmite in the centre, pass through the Corridoio del Deserto, which leads to the Sala delle Grandi Cortine with its red drapery of alabaster and the Grotta Bianca which is the brightest cavity in the world. Equipped with a helmet and torch, do not miss the Speleonight, a guided tour evening from July to late August. In the summer, every weekend and on Saturdays during low season only, you can watch Hell in the Cave, the only air show in the bowels of the earth, which relays the Divine Comedy Inferno. Once outside on the terrace of theMuseo Speleologico Spinelli, you can see the stars and planets through the telescope of the Astronomical Observatory. For children there is the Parco dei Dinosauri with animals from the Paleozoic to the Cenozoic age in their original size.

Here we celebrate the oldest carnival in Europe and the longest in Italy: On the 26th of December until the mardigras (www.carnevalediputignano.it). According to legend it all started in 1394 when Monopoli came to town with the relics of Santo Stefano and people celebrated the success of the expedition. The carnival celebrates giant floats, papier-mâché masks and striking night time parades. It is the opportunity to learn more about the historic centre, distinguished by narrow streets and courtyards, where there are mixtures of architectural styles. In Piazza Plebiscito, you can admire the austere Chiesa Madre di S.Pietro Apostolo, in Romanesque style, as opposed to the Palazzo del Bali, home of the Knights of Malta.

Fond of “mozzarella”, “burrata” and “stracciatelle”? Welcome to Noci, in the Murgia of the Trulli, famous for its high quality craft production of dairy products, a must for those who love food and wine. Its town centre is a succession of neat streets, stone chimneys that give off ancient perfumes, shrines and typical Gnostre, small courts with three closed sides, which are named after two of the most interesting festivals in the area: Bacco nelle Gnostre, festival of wine and chestnuts in November and the Pettole nelle Gnostre and cioccolato in sagra in December.
In the warehouses of old mill houses the Parco Letterario Formiche di Pugliais dedicated to the writer Tommaso Fiore.

It is protected by UNESCO World Heritage and has been a listed site since 1996 for its monumental Trulli village of the 1400’s. Made with dry overlapping stones, whitewashed base and cone-shaped roof with pinnacles of various shapes and symbols, its divided into two districts Rione Monti and Aia Piccola. Move through the narrow, winding streets and reach the Trullo Sovrano, the largest with two floors and an internal staircase. At Casa Pezzolla, composed of 15 interrelated trulli, there is Museo del Territorio with exhibits, tools and examples of local traditions.

The name is due to the circular layout of the village, among the most beautiful in Italy, overlooking the rest of the country and throughout the Valle d’Itria. Among the picturesque streets, surrounded by the white walls of houses, you will notice the Cummerse, ancient settlements, rectangular in shape with sloping roofs made of “chianchette” and tiles made of flat rock.

It is part of the Borghi più belli d’Italia Club, it has a medieval heart and is also known as “the island”, which evokes an oriental village feel with whitewashed houses, narrow streets, highly polished stone floors, arches, stairways, flower balconies and squares. At the entrance of the old historic centre stands the Norman- Swabian Tower, while Piazza Vittorio Emanuele is the meeting place for an aperitif. For dinner, stop at one of the many hot stoves attached to butcheries and enjoy the legendary“bombette”, or simple slices of veal stuffed with cheese, rolled and skewered on a spit.

When you walk in the city centre and get lost in the alleys, you will understand that Martina Franca is yet another baroque capital of Puglia. You will admire the mansions with wrought iron balconies, the rich portals with coats of arms and apotropaic masks, churches and monuments. Every corner exerts art and history. It surprises you with elegant detail, arches, secret gardens and squares that offer spectacular views, such as Piazza Plebiscito. Here stands the façade of the Basilica of San Martino, with its high relief of San Martin and the poor. Inside, notice the exquisite workmanship in the altar of polychrome marble and the stylish Cappellone del Santissimo Sacramento in late Baroque style. Pass Porta S. Antonio, also known as Arco di Santo Stefano and enter Piazza XX Settembre which is dominated by the Palazzo Ducale, built by Petracone V Caracciolo and today is the base of the town hall. It’s majestic, with its 300 rooms, theatre, chapel and stables. The typically baroque facade is divided horizontally by a long wrought iron balcony. Climb along the broad staircase leading to the royal apartment, where you will find the Cappella dei Duchi, the Sala dell’ Arcadia, the Sala del Mito and the Sala della Bibbia. All richly decorated by Domenico Carella in 1776.

This tiny fishing village has a picturesque harbour and many restaurants overlooking the sea. The countryside is dotted with old farmhouses amid olive groves, a refuge for the elite tourist. Do you like golf? There is an 18 hole course overlooking the Parco Archeologico di Egnazia, one of the most important sites in Italy, with ruins dating from the Bronze Age, massive walls and the messapiche necropolis, remains of the ancient Roman centre from the third century B.C. Visit the 11 rooms of the Museum with finds from the Bronze Age to the Middle Ages.

There’s something for every taste. Prefer the hills? Get on the Selva to enjoy the coolness from the Holm oaks and chestnut trees. Like adventure? Zoo Safariis the largest wildlife park in Italy (www.zoosafari.it). If you want to discover Fasano, visit the U’mbracchie, the Shadow, the old town with narrow streets and built up lime washed houses. For a walk outside the town, the Tempietto di Seppannibale is of great architectural value, a building dating from the early Middle Ages.

Check this park out by foot, by bike or on horseback, following the three routes proposed in the 1000 acres, between Ostuni and Fasano. Have a pair of sandals in your bag because the park reaches the sea and it has 6 km of coastline of dunes covered with 600 years old juniper specimens. Around the wetlands of Salt Steppe, you find the kingdom of rush and glasswort and expanses of farmland with olive trees, pastures and cropland. Part of the organization Presidio Slow Food with the Pomodoro Regina of Torre Canne and organic products such as oil, honey, wheat Senatore Cappelli, eels and mullet are bred in the basins of an ancient aquaculture facility from the 19th century.

From the road below, it appears like a mirage of white light. From the ancient town, up the hill, you can admire beautiful scenery. Via Cattedrale divides the medieval heart named Terra in two, where you can visit the former Carmelite Monastery. Today this is the base for Museo delle Civiltà preclassiche della Murgia Meridionale which exhibits the cast of Delia, a pregnant woman who lived 25,000 years ago, found in the cave of Santa Maria di Agnano. Stroll through the narrow alleys, steep stairways, craft shops and restaurants, courtyards and piazzas where white houses are dotted with geraniums. The fifteenth century Romanesque-Gothic Cathedral has a beautiful rare 24 rays rose portal. Legambiente gave the Blue Flag again this year for its beaches. 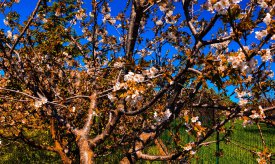 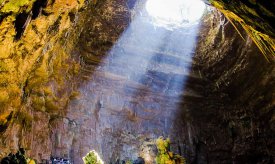 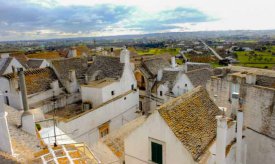 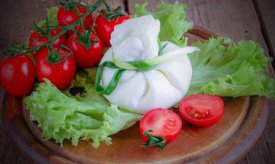 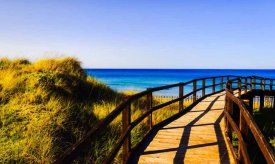 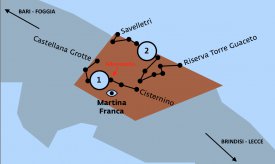